You are here: Home / The Practice / Philosophy with children

What has philosophy to do with primary school? Whether in a positive way or critically, most of those who hear of such an initiative are puzzled and raise the question. How could this activity even be considered with children aged three to eleven while eighteen years old teenagers, whose Bachelor results in the field are not particularly good, often struggle with this strange material of dubious reputation? Or else, let’s ask the question differently: at eighteen, isn’t it too late to philosophize, too late to start in any case?

Knowing what we are saying

There is a recurring obstacle when it comes to understand the nature and issues of the philosophical exercise taking place in the form of a discussion. It consists in thinking that to philosophize amounts to merely expressing oneself, communicating something or defending a thesis. Even if it is possible to lead a philosophical exchange in many ways, including those just mentioned, we want to emphasize here the idea of a philosophical discourse that reflects itself, that sees itself and that develops in a conscious and determined way. We are starting from the assumption that to philosophize is not merely to think, but that it raises a more specific injunction: philosophizing enjoins one to think about thinking, to think about one’s own thought.

The nature of philosophizing

In any exercise, it is not always easy to distinguish the substantive requirements from the formal ones, to link the formal rules to the skills required to work. However, we will do our best to describe our exercises by distinguishing what falls into one or the other of these characteristics, so as to perceive what comes from the spirit and what comes from the letter. To do this, since operating rules are nothing but a more or less successful application of a theoretical project, it seems illuminating at this point to bring forward a thesis on the nature of the act of philosophizing. Although we can’t deny either the fact that, in turn, theory undergoes an inflection in the face of practical outcomes, from either the successes or failures of practice.

Reference book: The practice of philosophy with children 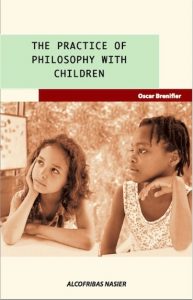 The idea of practicing philosophy with children is considered rather surprising, since young adults who have to engage in it already have a difficult time with this strange activity. The author of this book wonders in an opposite manner: When you are eighteen, is it not almost too late to start philosophizing?

To philosophize it to learn to think, to think consciously, by oneself, through the others, it is to deepen and to analyze ideas and problems. Throughout this book, many practical and theoretical suggestions are provided for the teacher or the parent who thinks that it is never too early too learn how to think, who believes that the questioning of the child should be valued and encouraged.
> Download the book
Nous utilisons des cookies pour vous garantir la meilleure expérience sur notre site. Si vous continuez à utiliser ce dernier, nous considérerons que vous acceptez l'utilisation des cookies.Ok
Scroll to top